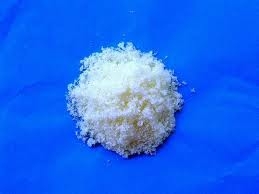 Aluminium chloride (AlCl3) is the main compound of aluminium and chlorine. It is white, but samples are often contaminated with iron trichloride, giving it a yellow colour. The solid has a low melting and boiling point. It is mainly produced and consumed in the production of aluminium metal, but large amounts are also used in other areas of chemical industry. The compound is often cited as a Lewis acid. It is an example of an inorganic compound that "cracks" at mild temperature, reversibly changing from a polymer to a molecule.