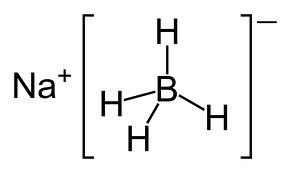 Sodium borohydride, also known as sodium tetrahydridoborate, is an inorganic compoundwith the formula NaBH4. This white solid, usually encountered as a powder, is a versatilereducing agent that finds wide application in chemistry, both in the laboratory and on a technical scale. Large amounts are used for bleaching wood pulp. The compound is insoluble in ether, andsoluble in glyme solvents, methanol and water, but reacts with the latter two in the absence of base.[2]